This type of assessment carried out by our ethical hackers aids to:

As a result of our testing, you’ll be able to view your applications through the eyes of a hacker, to discover where you can improve your security posture. Our security consultants produce findings in written reports and provide your team with the guidance necessary to effectively remediate any issues we uncover. 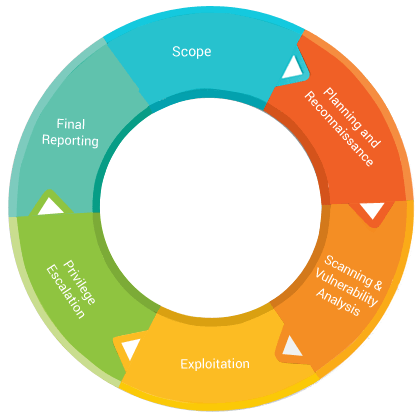 TeraByte’s approach consists of about 80% manual testing and about 20% automated testing – actual results may vary slightly. While automated testing enables efficiency, it is effective in providing efficiency only during the initial phases of a penetration test. At TeraByte, it is our belief that an effective and comprehensive penetration test can only be realised through rigorous manual testing techniques.

In order to perform a comprehensive real-world assessment, TeraByte utilises commercial and open source tools, the same tools that hackers use on each and every assessment. Once again, our intent is to assess systems by simulating a real-world attack and we leverage the many tools at our disposal to effectively carry out that task.

We consider the reporting phase to mark the beginning of our relationship. TeraByte strives to provide the best possible customer experience and service.

Simply put, our objective is to help fix vulnerabilities, not just find them. As a result, remediation re-testing is always provided at no additional cost. 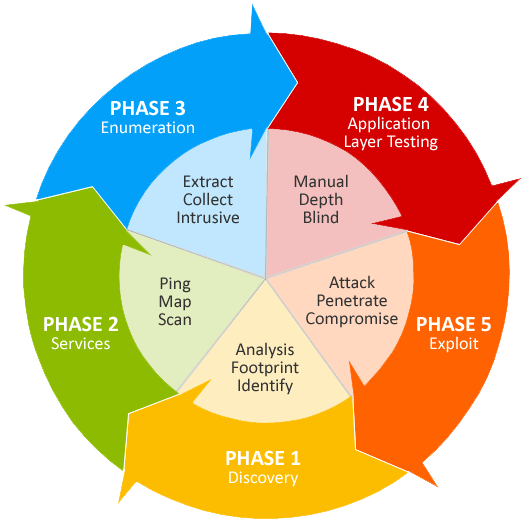 Every web application penetration test is conducted consistently using industry standard frameworks, to ensure a sound and comprehensive penetration test.  At a minimum, the underlying framework is based on the Open Web Application Security Project (OWASP), but goes beyond the initial framework itself.

The first phase in a web application penetration test is focused on collecting as much information as possible about a target application. Reconnaissance, one of the most critical steps of a web based application test, is done through the use of public tools such as search engines, sending simple HTTP requests, or specially crafted requests. As a result, it can be possible to force the application to leak information, e.g., disclosing error messages or revealing the versions and technologies used.

Authentication is the process of attempting to verify the digital identity of the sender of a communication. The most common example is the log on process. Testing the authentication schema means understanding how the process works and using that information to circumvent the mechanism.

Session Management is defined as the set of all controls governing the stateful interaction between a user and the web application he/she is interacting with. In general, this covers anything from how user authentication is carried out, to what happens when they log out.

Authorisation Testing involves understanding how the authorisation process works and using that information to circumvent the authorisation mechanism. Authorisation is a process that comes after a successful authentication, so the pen tester will verify this point after he/she holds valid credentials, associated with a well-defined set of roles and privileges. As a result, it should be verified if it is possible to bypass the authorisation schema, find a path traversal vulnerability, or find ways to escalate the privileges.

The most common web application security weakness is the failure to properly validate input coming from the client or from the environment before using it. This weakness leads to almost all of the major vulnerabilities in web applications, such as cross site scripting, SQL injection, interpreter injection, locale/Unicode attacks, file system attacks, and buffer overflows.

Web services have certain elements of exposure just like any other protocol or service. What’s different is that they can be used on HTTP, FTP, SMTP or MQ among other transport protocols. As a result, vulnerabilities in web services are similar to other vulnerabilities, such as SQL injection, information disclosure, and leakage, but web services also have unique XML/parser related vulnerabilities.

Here at TeraByte IT, we consider the delivery and reporting phase of the test to be the most important piece and we take great care to ensure we’ve communicated the value of our service and findings thoroughly. The deliverables consists of a report that includes several key components including, but not limited to: Executive Summary, Scope, Findings, Evidence, Tools and Methodology.

Findings are communicated via email, however they can be presented in-person or virtually via Skype or Google Hangouts – whichever medium is most conducive for communicating results effectively. During this time, TeraByte IT consultants will walk through the report, in detail, to ensure all findings and their corresponding description, risk rating, impact, likelihood, evidence and remediation steps are thoroughly understood.

While this typically involves a single meeting, there is no limitation to that number. The key underlying message is that all information is clearly understood and that a roadmap toward remediation / mitigation is crystal clear.

Some of the key components to our physical penetration test deliverable include, but are not limited to: